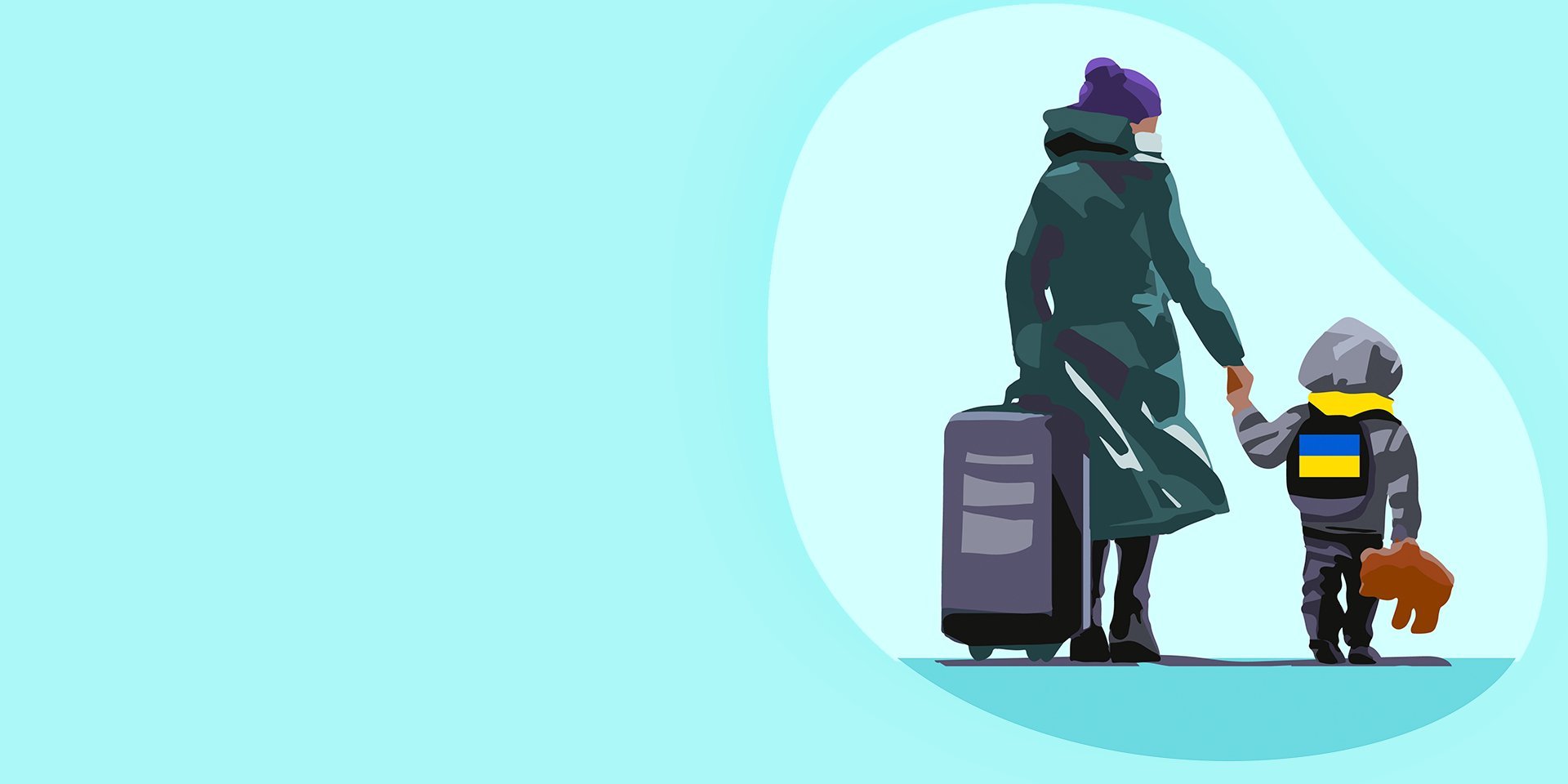 Scores of volunteers are helping civilians leave isolated settlements in war hotspots across Ukraine. Those stuck under Russian occupation risk torture in so-called filtration camps, or concentration camps, and being forcibly deported to Russia.

V olunteers from Dopomohayemo Vyikhaty (DV, Ukrainian for “Helping to Leave”) NGO have enabled 13,500 Ukrainians to relocate to safe parts of the country. Several teams are working to facilitate civilian evacuation from cities like Mariupol and Kharkiv, in addition to pockets of Russian occupation in Kharkiv, Zaporizhzhia, and Kherson oblasts, as well as parts of the Donbas. The most vulnerable – seniors and disabled people – are given priority.

Combined with other kinds of assistance – financial, psychological, facilitating evacuation – to date DV has helped over 79,000 people. More than 6,000 people were evacuated from Kharkiv Oblast alone over the last month. It costs on average $101 per person to arrange safe passage. These funds are collected via donations on DV’s website.

“Unfortunately, the situation in occupied parts of Donbas is dire,” Yakovenko explains.“
Occupation authorities from proxy Russian puppet statelets are rounding up locals, including children, forcing them to participate in filming propaganda pieces. They are forced to say on camera that invaders are ‘helping’ them, distributing humanitarian aid. It’s all staged purely for the cameras – there is no actual humanitarian relief effort on the ground.”
Фото: The photo was provided by the organization

Yakovenko recalls one particular wheelchair-bound woman, forcibly taken to Russia. She was placed at some local care home there, most of her belongings – including the wheelchair – were taken away. FSB agents would regularly come to interrogate her. They were looking for her passport, took her phone to message other people on her behalf, likely hoping to gather some intelligence.

“We mobilized local volunteers to launch a whole operation to save this woman,” said Yakovenko.

“She somehow managed to hide her passport away, and we were able to take her to Estonia at the first opportunity.”

“The house was reduced to ashes”

44 -year-old Svitlana from Mariupol is another woman who turned to DV for help. Volunteers managed to arrange her safe passage to Lithuania by way of Russia. Another volunteer met her at the end of the journey, and helped Svitlana to settle in the foreign country.

“The house was reduced to ashes,” Svitlana said, recounting the events of March 13.

“I found myself lying on the ground outside. My neighbors took me to the hospital… My fingers and hip were broken, there was a (laceration) on my foot.”

Svitlana was sheltering at that building with 12 other civilians, when a Russian air bomb leveled the site. Six people died, including Svitlana’s partner.

“They offered to ‘evacuate’ me to somewhere, but it was difficult for me at that stage,” said Svitlana.

“They claimed they were helping us. There was no point in arguing, but I couldn’t help but think that I wouldn’t need any help if they hadn’t invaded our land.”

Svitlana was airlifted to a hospital in occupied Donetsk on March 23. Conditions there were abysmal: running water was available three times a week at best, patients were treated rather harshly. Wounded soldiers from Russian proxy forces were being treated at the same hospital.

“We would travel to Donetsk very often prior to 2014 – it was like visiting neighbors,” Svitlana said.

“My employer was headquartered there. I was mortified to hear that a lot of guys went to fight for the so-called (Donetsk People’s) republic. It was sheer terror to hear them say they were fighting against Mariupol. They would tell us it was ‘liberation.’ I had a lot of questions for them, but knew better than to actually raise them. I was told to remain quiet – if I wanted to leave at all.”

Presumably, Svitlana could leave only after going through so-called “filtration.” She asked about the procedure on May 5, and was told that she would have to wait a month – the nearest available date was June 6. It was unclear where Svitlana was supposed to live this whole time, as she was on crutches. Eventually she was offered a place at a local refugee camp.

Svitlana heard about “filtration” from others. People – mostly men – would be confined to temporary holding areas in gyms, for weeks.

“DPR officials would call people in for ‘interviews,’ where you are interrogated about your family members – whether they are at all involved with the Ukrainian army of volunteer forces. Young men are stripped, inspected for tattoos,” Svitlana describes the “filtration” process.

Reports of what’s going in Russia-occupied areas of Ukraine are sparse and incomplete. According to DV, people there are stuck in isolation, tortured, and humiliated. Families are torn apart. Sometimes, people are lured into buses for alleged “evacuation,” but are instead taken to “filtration” camps.

Svitlana managed to escape the occupied Donbas, bypassing “filtration,” by coming to an arrangement with a local who took her across the border, despite the risk. Approaching the border, she scrubbed her phone of anything that could betray her true sympathies.

“I was asked about my views, about what I think of everything that’s going on,” Svitlana recalls her crossing the border.

“In order to escape, I told them what they wanted to hear.”

It took two days for Svitlana to cross the boundary. By May 9, she was in Vilnius, Lithuania. It felt like “a small victory” to her. Volunteer Ruta picked Svitlana up and took her to the state immigration service. Ruta then helped Svitlana to find accommodation, get a medical examination, and enroll in physical therapy.

Svetlana also mentions a volunteer Rostyslav, who has helped her a lot with many things – for example, helped her get clothes and other necessary things.

City of your roots

W e were waiting for some official word from the government,” Svitlana says, explaining why she didn’t leave Mariupol earlier.

“While communications were still operational in the city, our Mayor Vadym Boychenko wrote that Mariupol was defended by Ukrainian forces. And we could see that – the defense was there. But then, communications went down, and by March 8 firefighters, ambulances, and police were gone from the streets. People were trying to get any information on what’s going on, but we couldn’t. I was worried.”

The mayor left Mariupol by March 23, reportedly to be able to remain in contact with other regional officials. A week prior, the International Committee of the Red Cross announced that its 30 employees and their families had left the city as well, as it was no longer “operationally possible” to keep their Mariupol mission going.

“I remember hearing from someone that the Red Cross had reportedly arranged for civilian evacuation through a humanitarian corridor, but that never panned out,” Svitlana recalls.

“I was hurt to see the mayor leave the city while still urging the rest of us to remain. He was somewhere safe at that point. How could he do that to us? We were counting on him.”

Svitlana has been staying with friend in Lithuania for a month. A week of physical therapy has helped a lot – she walks without a cane now. She intends to get psychological help as well, and is thinking of what her future might look like.

Svitlana’s son was studying in Kharkiv before the war, and has since moved to Poltava. Wartime travel restrictions prevent him from leaving Ukraine to reunite with his mother. Svitlana had to leave her car and brand-new apartment behind in Mariupol.

“I lived in that flat for just three months – it was a dream of mine I managed to finally attain,” said Svitlana.

“Following a fire, the building is no longer safe for living, but my flat remains intact, as far as I know, although some valuables have been stolen.”

Her friends are saying that Mariupol “authorities” are urging people to come back – allegedly to secure their belongings – as damaged buildings are set for demolition. But this is clearly a ploy. Svitlana would like to come home, but it’s unclear when that might be possible.

“It makes no sense to go back to Mariupol right now, even as I miss the city very much. My roots remain there,” she says.

By continuing to browse NV.ua, you confirm that you have read the Terms of Use of the site and agree to the use of cookies.